On Tuesday night, June 29th, 1937, there was a birthday party being held in the Silver Slipper bar, at the beach in Betterton. Everyone enjoyed themselves and had a good time. By 2 a.m., all had gone and the bar was closed. Around 6 a.m., smoke was seen coming from the building housing the Silver Slipper and a gift shop. Soon, cars were riding around town, blowing their horns to awaken the residents and people were hollering FIRE! FIRE!. You see, there wasn't any fire siren in Betterton at that time, because there wasn't any fire company. Calls went out to Rock Hall, Chestertown and Millington, the only fire companies in Kent County at that time. Townspeople began throwing water on the fire with buckets or whatever they could find. This certainly wasn't much help to a fire this big, so the flames quickly spread. When the fire companies arrived, they went right to work and did their usual good job, saving part of the Boardwalk, the Ericsson Line pier and the Hotel Chesapeake. The buildings housing the concessions were all frame, so about half of Betterton's amusements were destroyed, including a pier, bowling alleys, pool tables, dance hall, bath houses and numerous other concessions.

There was a lot of talk around town for the rest of the summer and even into the winter about the fire, but the question most often asked was "What would have happened if we would have had a fire company right here in Betterton?" The talk soon led to action and in the spring, the Betterton Volunteer Fire Company was born. A new infant in the town, but destined to grow like any other infant.

The Betterton Volunteer Fire Company, Inc. was organized on March 8, 1938. The first truck, a 1917 Seagrave 1750 GPM pumper, came to town the night before. Norris Arment, a Betterton resident, was a former engineer for the Franklin Fire Co. in Chester, PA. He made arrangements to buy the truck when he heard Franklin had to get rid of it. He bought the truck for $450.00, using his own money, went to Chester to get it and house it in his garage, at the beach. Needless to say, Mr. Arment was elected to be the first chief. On June 1, 1938, a rental agreement was signed, to cover three years until June 1941, at $15.00 per month, for the garage rent. Suppers were held in the Methodist Church and money was raised to pay Mr. Arment back his $450.00. Betterton Volunteer Fire Company was off and running.

Later, another piece of equipment was purchased. Once more, Mr. Arment bought it from Franklin Fire Co. This was a 19-- Pierce Arrow rescue truck, much smaller than "BIG BERTHA". There was no pump nor water on this truck, as it carred ropes, axes, pry bars, sledge hammers and other types of rescue equipment. If this wasn't the first rescue truck in the area, it was one of a very few. It was way ahead of its time and wasn't used to its full capacity. People in those days would come upon on an accident, get the occupants out of the cars and take them to the hospital in their own cars. Because of this, the truck was loaded with extra hose and other fire fighting equipment and used as a general purpose truck.

March, 1939, saw a second pumper also purchase from Chester. This was a 1919 American LaFrance 750 gallon pumper. Now they figured they were in good shape, except they didn't have much water. Charles Clark talked an oil company into donating an old oil tanker to the company. This was a 1932 Chevrolet and believed to be the first tank truck on the Eastern Shore.

This young company was on the move. Two pumpers, one of which was the largest of it's kind in the country, plus the first rescue truck and the first tanker on the shore. A new fire house was needed and Mr. Arment's lease ran out in 1941. Mr. Ernest Horsey donated the ground, a loan was arranged and the first fire house was built in 1940 and 1941. "BIG BERTHA" broke a crank shaft and was stored in another garage, but the other three pieces of equipment were housed in the new fire house.

In 1945, truck #1, later to become #51, was selected to become Betterton's first "New" fire truck. A 1945 Chevrolet chassis was obtained from the U.S. Army, which had all the trucks tied up for the war effort. Faces really lit up as this "New Bought" truck was brought home from New York with its 500 gallon tank and 550 GPM pump.

Later, new chassis were bought for tank trucks, tanks were transferred from one truck to another. Front end pumps were put on some, etc. and so it went. As one was fixed up or replaced, the old ones were sold to individuals, after they had put in a lot of faithful service. 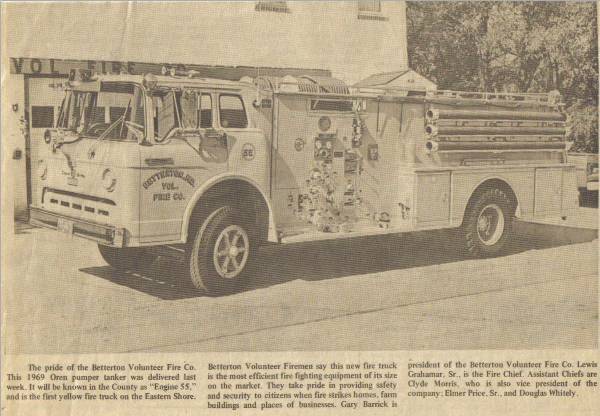 Then in 1980, a piece of equipment was added that would change the company's service to its people, as well change the lives of some members of the company. This was the donation of the 1976 Chevy Suburban, by Tenneco. This was used as an emergency truck, making runs with the Kent & Queen Anne's Rescue Squad in the area. The population of Betterton was 327, and the fire company had 12 E.M.T.'s (Emergency Medical Technicians), eligible to respond with this vehicle to fires, accidents and medical calls. All types of medical equipment was carried on this truck, along with a 12,500 lb. Cascade system. The calls for this truck and its devoted crew made a big change in the number of calls. There was a time, when if we had 20 or 30 calls, we had a busy year. One year, we answered 13 fire alarms. In 1987, we responded to 105 calls.